I am part of a group of volunteers at The Hidden Gardens who are working towards gaining Level 1 John Muir Award.

Named after the Scots born naturalist, who is generally considered to be the ‘Father of Modern Conservation’, the John Muir Trust encourages groups and individuals to become involved with the conservation and protection of wildlife areas.

Following Muir’s principles the volunteers will work to meet the Trust’s four challenges of: Discover, Explore, Conserve and Share to obtain their award. 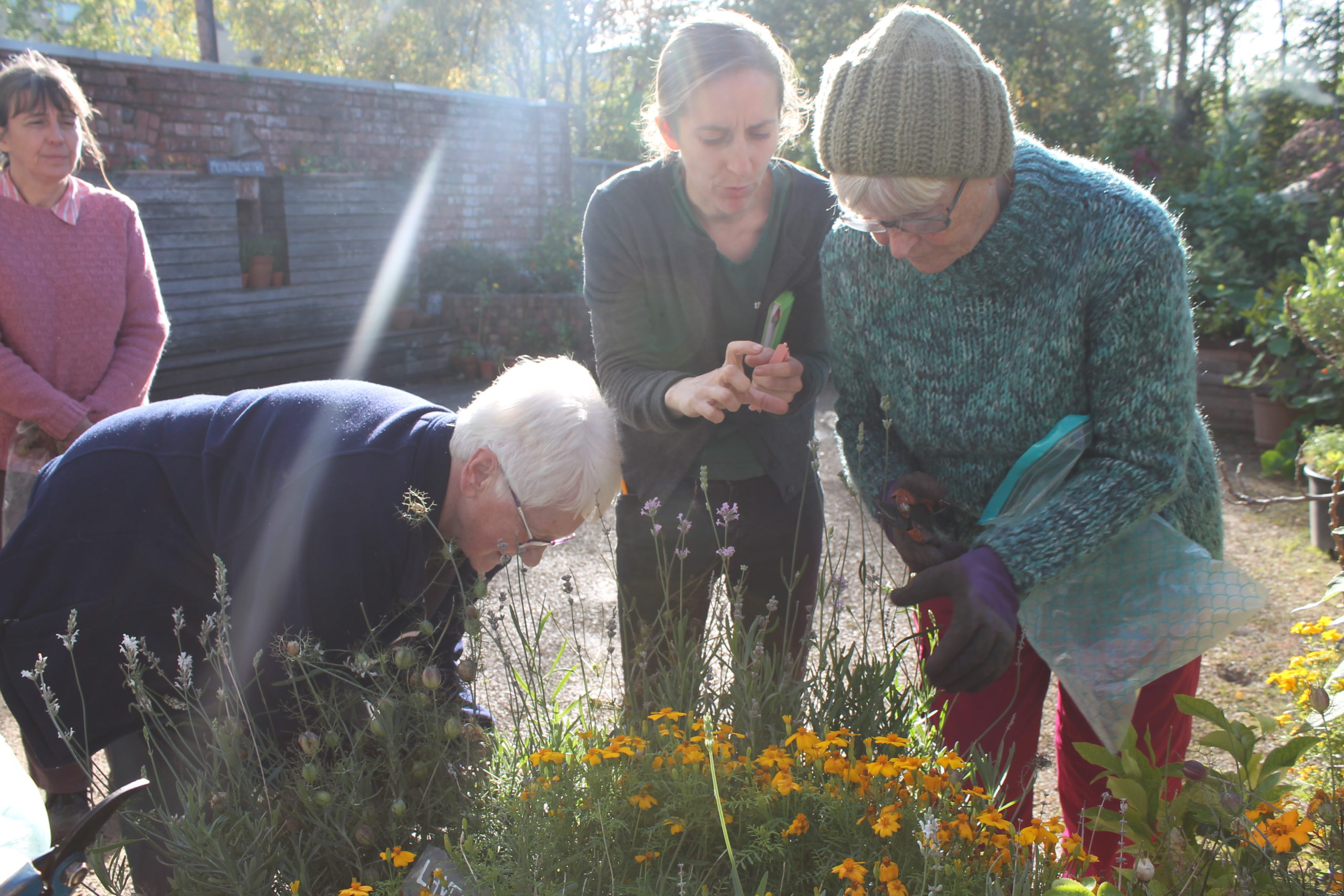 Guided by two staff members the group surveyed the gardens for pollinators with a particular focus on butterflies. Different species were discovered and identified and research was done to gain insight into the habitats and plants needed to support their lifecycle. Many of us were not aware that some species, such as Peacock and Small Tortoiseshell overwinter in hibernation as butterflies! Other species hibernate as caterpillars and pupa. 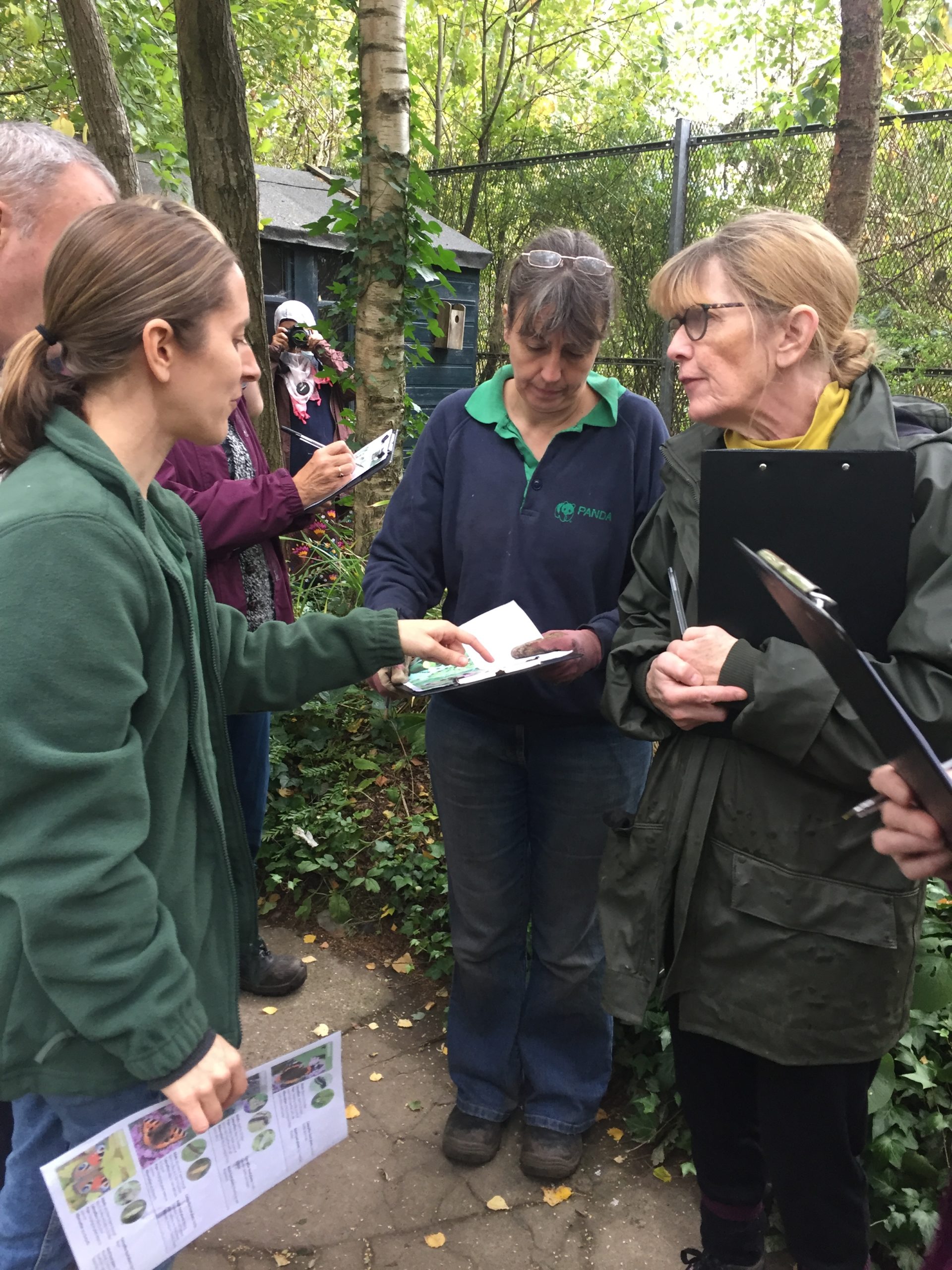 We went on to explore the gardens to determine what was needed to enhance the environment for our butterfly population. We carried out a survey of all the plants to establish which were beneficial for adult and caterpillar food and also looked for plants that would be vital as hibernation sites as many of the pupa secure themselves to plants over winter. Wild areas in the garden were explored to see if there were places, such as log piles, where adult butterflies could hibernate.

Our present and ongoing task is to conserve and develop the gardens so that they become a haven for butterflies! We have a dedicated meadow area which contains many native species such as nettles, meadow grasses and vetches that can often be seen as weeds but are the vital host plants for the eggs of Painted Lady, Ringlet, Orange-tip and many others. This area is managed to maintain a good diversity of plants by selective ‘weeding out’, plant division and seed collection. We learned that the Cuckoo-Flower is host to Small White, Orange-tip and Green-veined White and are now planning to distribute seedlings into the meadow next Spring. One revelation was that many Red Admiral butterflies migrate to Southern Europe in October! As ivy flowers are a late source of nectar for these and other butterflies we now leave the cutting back of Ivy until late winter.

To allow for successful hibernation we have ring-fenced particular wooded areas to remain undisturbed throughout the winter months. 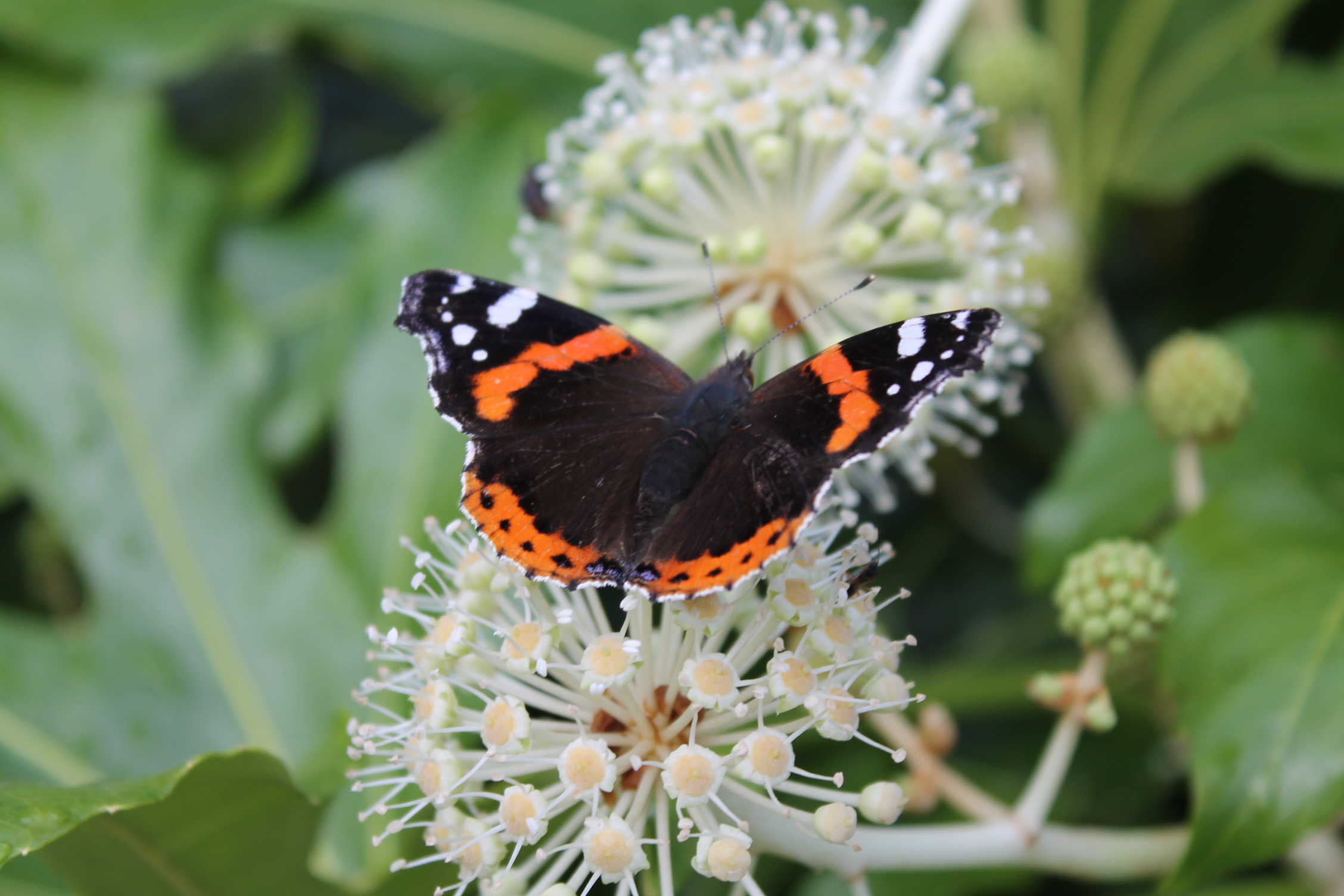 By undertaking the Award scheme the volunteers are now able to share their knowledge with the garden’s many visitors and encourage them in the nurturing of butterfly- friendly habitats. Plants that we have divided or propagated from collected seed will be on sale in the kiosk together with information about their pollinator friendly attributes.

We hope that this sharing of information will result in a healthy diverse population of butterflies in the area.

Allan Hughes, one of our dedicated gardening volunteers, wrote a piece of prose inspired by seasonal beauty of The Hidden Gardens.

Entitled ‘A Winter Solstice’, it is our pleasure to share it with you:

High up, a crow’s caw cuts into the sky as the diffuse glow of morning light begins to permeate the slowly rising haze.

The shimmering shadow of a returning fox briefly disrupts the calm; then fades. The quiet returns.

As dawn gradually breaks, groups of nestling bushes and shrubs awaken with the rustling of rousing wildlife.

Trees stretch with a concertina of balletic branches praising the arrival of the new day. The clinging mist finally releases and ascends, leaving a glistening layer of silvery white frost settling on the emerging pasture.

The delicate blades of grass sparkle in the morning light.

At the far corner of the extending lawn, the solitary figure of a Ginko tree stands tall and proud like a wise tribal elder. Its branches spiral upwards to the heavens. The surrounding congregation bows reverently in anticipation of the winter solstice.

Then, all is hushed. A single track of tiny prints zips through the crisp, white frost. All focus on the track as it makes its way towards the bottom corner of the lawn. Towards the Ginkgo Tree. The footprints come to a halt.

A little Robin Red Breast stands boldly on the cold, glittery grass, arching its head, to address the rising giant.

A loud silence fills the air. The little Robin hops closer, perching on the tree’s knobbly roots. Its tiny beak chirps……the silence gets louder……the Ginko considers the wee postulating creature……the silence intensifies…..then…at last, all is well…harmony prevails as the Robin Red Breast takes off, spiralling upwards, playfully twirling in and around the giants welcoming branches. All is bright.

It’s Dusk. A single snowflake drops delicately downwards towards Earth, floating precariously with the light breeze, hovering over thousands of orangey-yellow iridescent lights. A dark, imposing, organic shape
appears amongst the opalescent illuminations. As the little snowflake descends, the contours of the mysterious formation slowly expand, revealing a vast landscape surrounded by an abundance of diverse
dense foliage. On entering the grounds, the snowflake gravitates towards the long strip of land. Downwards it falls, steadily descending, prepares to land, then settles safely on the glistening grass.

The little Robin perched up high, shivers as it quietly looks on as more and more fragile crystals parachute by, filling the air with a kaleidoscope of colliding snowflakes forever freely falling. The wind picks up. More
and more frozen flakes are boisterously launched into the air in a sustained onslaught. Myriads of sparkling fragments hurriedly jostle for space, propelling bursts of snow into every nook and cranny. No corner is spared. Then, when the biting gusts of wind, at last, relent, the hail slows up, until, eventually, the invasion finally ceases. The quiet returns.

The Robin peeps out from its shelter. All is clear. The landing is complete. The slumbering garden is now thickly blanketed by soft, pure, white snow. All is calm.

A full moon illuminates the newly colonised terrain. The lunar light diffuses a cool, serene glow over the opulent gardens. The undulating snow softly cloaks the clusters of huddling bushes. Branches bend with lilting leaves. The undergrowth is hidden out of sight. As the last snowdrop falls to earth, the tranquil evening moonlight blesses the winters night. The long, untouched lawn elegantly emerges evenly covered, edge to edge, with a thick coating of soft, fresh, snow. Up above in the clear night sky, the Ginkgo tree is eloquently silhouetted by an aurora of celestial light, as a constellation of stars twinkle brightly in celebration of the solar resurrection. It’s the longest night.

The long silent night encloses in on the world. The Earth is at rest. The garden is sound asleep. The evening is still, quiet, at peace.

Reaching upward, the Ginkgo tree embraces The Heavens. The surrounding ensemble bows as the ethereal cycle unfolds. The tree’s outstretching branches herald the Transformation of Time.

It is a time of change. Seasons change. Dark gives to light. Night to day. What was dormant, will now grow. As the night passes and eventually draws to a close, the passage of Time will bequest its gift to Creation. The hidden world will awaken to the unveiling of the divine light of dawn, radiating with the essence of the suns’ warming presence, that shall transfigure a new beginning, a new day, a new life.

We’ve a few places left on our next Weekend Volunteering Opportunity. We’ll be pruning, maintaining the Gardens and getting them ready for Autumn and Winter. No previous gardening experience is necessary, just a desire to work outdoors in the Scottish weather.

Here’s what some previous Weekend Volunteers have enjoyed about volunteering with The Hidden Gardens.

Today was the last Taskforce of the year. It was a varied day, with part of the group cooking up a delicious lunch for everyone to share, and the other part surveying worms in The Hidden Gardens. Glad no one got mixed up!

The Hidden Gardens couldn’t exist without all the hard work of our volunteers. Thanks so much for all your work this year, and maybe we’ll see you next year too!

This week Taskforce volunteers made their own cyanotypes. Using cartridge paper that had been soaked in light sensitive chemicals, they chose and arranged leaves and flowers from the Gardens to make their own pattern.

Check out the slideshow for some behind the scenes shots of cyanotype creation!

A fantastic exhibition celebrating volunteering at the 2014 Commonwealth Games is at the People’s Palace. Co-produced by the Games volunteers and Glasgow Museums, the exhibition explores the impact the Games have had on the people of Glasgow.

The Timebank, commissioned by The Hidden Gardens as part of the Mandela Celebration event, will now be in the Gardens until Thursday 21st August.

Come by to see some of the original volunteer opportunities and pledges. We hope this inspires you to make a pledge of your own.

*Our administrator claims that the opportunity and pledge cards look like a 67, a homage to Mandela Day‘s call to action. We can’t quite see it.

After all that fun, we enjoyed eating delicious pea, mint and roasted garlic soup and lavender shortbread made by our volunteers. The gardens offered a wonderful backdrop for the event creating a peaceful space to relax in the evening time.

There’s a wonderful (short!) video by Raj_Tigerstyle of the night. Watch it here!

On Saturday 14th June, 1pm-4pm, we’re having another of our popular Weekend Volunteer Opportunities at The Hidden Gardens, as part of Ready Steady Grow Pollokshields.

We’ll be planting up our borders and doing other essential summer tasks. If you’d like to come along to share your skills and learn something new, email andrea@thehiddengardens.org.uk

Why not bring along a friend too! Places are limited, so please book your spaces as soon as possible. We’ll be meeting at the chimney at 1pm.

The event will shine a light on volunteering in our local community, showcasing the different ways people give their time in support of their community. We hope it will inspire more people to pledge their time to contribute to the fantastic work already being done.

For more information about the event email me